In two earlier posts, I told about two ardent filmmakers, Ed Wood and Georges Méliesè, who both seized accidents when making their films. Both films brought them fame but in two completely different ways: Wood for the worse film ever made and Méliesè for his innovation of visual and special effects.

Today no one refers to Wood´s demise of an actor, while shooting the film, as an accident like one does with Meliese´s film, that jammed and a bus vanished, but where Méliesè managed to turn a disadvantage into an advantage, which Wood didn’t.

Some might say Méliesè was gifted, and Wood wasn’t. That kind of answer leaves me unsatisfied as if Wood would have known half as much as Méliesè I think Wood might have come up with other solutions to motivate the audience to share his vision. Since what differed the two was that Méliesè had worked as an illusionist and where the film camera was just another medium that he could use to develop new tricks. Wood had no such experiences but a willful desire to realize a dream.

But to fully understand how to distinguish the differences in Méliesè´s and Wood´s metacognitive abilities, I´m about to enter their heads and like you to come along. By comparing the two´s constructions by seeing, sensing, and thinking how something could look like from someone else´s perspective, there is a specific asset I like to point at, which has to do with the act to take perspective. Below you can see five pictures from Méliesè´s film, “A trip to the moon” (“Le voyage dans la lune”) made 1902, and “Plan 9 from outer space” from 1959. Take a look and compare how the two realize their visions to be shared and experienced by an audience:

“A trip to the moon” 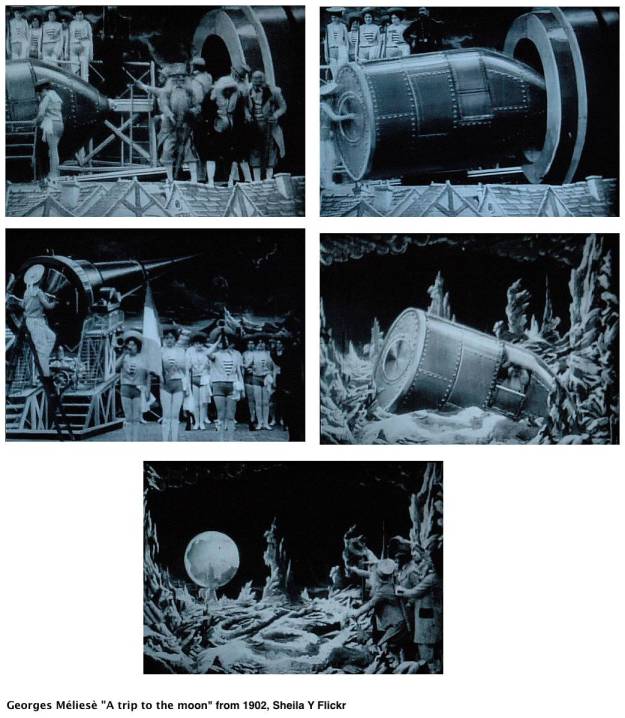 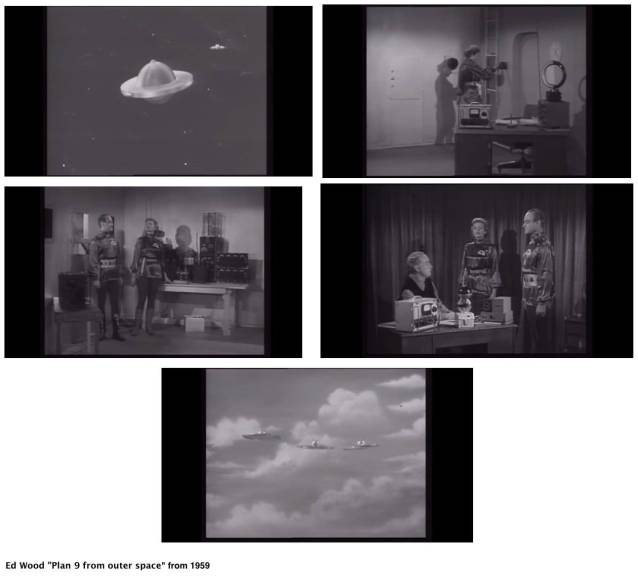 As you can see from the pictures, Wood did cognitive tricks as well as Méliesè when trying to make us believe that we were seeing alien space crafts and where he even let us get inside the spacecraft and meet its inhabitants. In “The trip to the moon” Méliesè let us see how a space rocket with a crew is sent to the moon. Opposed to Wood, by just looking at the props, Méliesè´s years of practice on theatre scenes are noticeable. It was also at the stages Méliesè learned about how an audience perceptually and cognitively interpreted the information since he got the chance to listened to the audience´s immediate reactions to his settings and activities. And there is one specific skill that stands out when comparing the two´s work and ability to take perspective. What Méliesè does is to let us go to the moon, and by allowing us to look at the earth, he shows how he, on beforehand, had thought about narrative elements from different perspectives and let the audience see the earth. 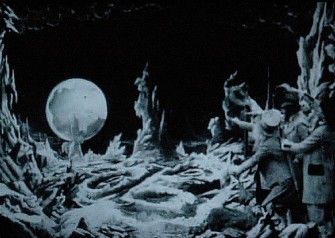 Wood had as Méliesè imagined a lot of things about aliens coming to earth and waking up the dead but as he never looked at the elements of construction from any other perspectives than his own, he prevented the audience from accessing the story without passing Wood´s mind by having to ask what he had in mind. Even if Wood had a narrator in the film that told the audience what happened and how to interpret the information, it only caused a contrast between the audience and Wood where the audience ended up “disagreeing” as they did not “see” what Wood thought they should see. And the only thing the audience could think of was who this Wood was.

Through the years teaching narrative design I´m convinced that even Wood could have learned what science call theory of mind, which is to take others’ perspective to understand that others have beliefs, intentions, and desires as well as oneself, but whether Wood would listen, that´s another question. But as to excuse Wood, science did not know so much about metacognition at this time, so how could Wood? But if one knows what it means to take perspective one can access several basic guidelines within narrative cognition to see how it´s like to have the office in people´s heads by the means to take care of people´s anticipation and hypothesizing.

By using terminology from narrative theory, I will present two basic principles to have in mind when taking perspective as to think about how people perceptually and cognitively interpret information. Due to that narrative is not media-specific and since I don´t want to cue the comprehension to a certain medium, which is also the reason I refer to myself as a constructor, I call those who receive the information, receivers.

Principle 1 The two-parts-activity of plotting

You really don´t have to remember the name of terms as syuzhet and fabula but what they explain is that construction of information and the comprehension of the constructed information are two different activities (Bruner, 1991). This view, seeing a two-parts-activity in constructing and interpreting information was presented in the early 20th century by Russian formalists who made a distinction between the syuzhet (plotting) and fabula (interpretation as created by the receiver) (Bordwell, 1985). Plotting is a more established term where a constructor knows that every piece of information that is set to form a pattern will be interpreted by the receivers that are also plotting from the information that is presented.

So when Wood solved the problem with the loss of an actor when shooting “Plan 9 from outer space”, by replacing the actor with a new person who had to cover his face to not reveal that the character was played by two different actors, it gets a lot easier by thinking about the two-parts-activity how the constructor´s intentions were perceptually and cognitively interpreted by the receivers.

There is another term called diegesis which can aid the narrative and cognitive analysis of the confusion “Plan 9 from outer space” caused. It refers to how the fictional world is presented to the receiver (the plot). One example of how to use the term when analyzing narrative construction is when speaking about diegetic and non-diegetic sound. If the sound comes from the fictive world like footsteps, breathing, voices, etc., it´s said to be diegetic, and if you hear an orchestra playing in the background to put tense to the fictive world, it´s said to be a non-diegetic sound (Bordwell, 2017). In the example from Wood´s film the covered face could be seen as non-diegetic “circumstances” but without adding any function to the overall form whereby the receivers could not do any other assumptions or inferences other than the “information” was not a part of the story – at all.

If looking at an example from playing video games, it is quite common to run into information where characters (NPC, non-playing characters) are acting strangely as the non-diegetic “circumstances” in “Plan 9 from outer space”. Within video games, one would call it “glitches” (or “bugs”) which refers to unintended and unforeseen states of the video game. What is interesting is how people can put up with unintended circumstances in some contexts but not in others. Especially when a sad unforeseen loss of an actor happens, and one might think people would be more forgiving.

When it comes to narrative construction, people are very willing to accept a lot of mistakes if they know how hard something is to achieve or convey. In video games, players know, for example, how difficult it is to get an advanced AI to work smoothly, and therefore, the expectations are lowered. Unless the glitch (bug) turns out to be game-breaking (which means that the game can´t be played or completed) people are likely to take the rough with the smooth. If looking at Wood´s and Méliesè´s films, were none of them, for that matter no one, had been in space but where the expectations to see the earth from the moon in 1902 were undoubtedly much lower than in 1959, the anticipations on Wood was, of course, a higher. But Wood was not without guilt. If going out like this… 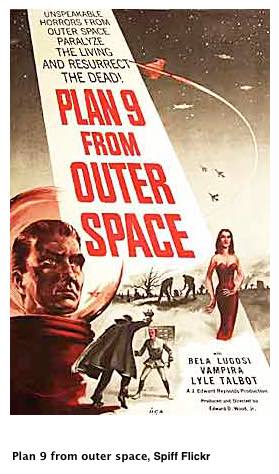 …one has to make sure to be able to deliver since expectations are the same as making a promise. And what happens when a promise is breached, someone will get disappointed.

I use to say “don´t show, involve” in the design of meaningful experiences in interactive media. What I refer to is the cognitive level of engagement that one should ensure to activate people´s thinking. But what do I mean by activating people´s thinking?

Since the syuzhet and fabula are media independent systems by how we construct and deconstruct (interpret) information I will decouple from Wood and Méliesè for a while to show a last basic principle by how narrative cognition on construction works, i.e. how to take perspective as a narrative constructor when thinking about others thinking in relation to one´s thinking. I will leave it to the caveman in the picture below to explain what it means from a constructor´s perspective to activate people´s thinking. Or rather, what it means to take care of people´s thinking.

.
As you can see the constructor has given himself a lot of work to do if he likes to do a plotting that reveals the caveman as being the president because of people´s anticipations and hypothesis from what they know about cavemen. But it´s also here the constructor, by taking perspective, has a chance to surprise receivers by presenting unexpected elements, which a president from the present day, looking like a caveman, would do. And from adding element by element when plotting a pattern (diegesis), the constructor gives the receivers new information, which will engage them in plotting new hypothesis.

In an interview with the game designer Fumito Ueda, who created the game “The last guardian”, Ueda mentions something very interesting that relates to the constructor´s work keeping two parallel activities in mind over time, the constructor´s and receiver´s (syuzhet and fabula). Since he was working for nine years developing the game he got tired of a central element to the plot pattern (a supernatural animal) and had to go back to the initial documents to remind himself about the players and how they would experience it as he did initially. And what the example shows is that taking care of people´s anticipation and hypothesis also includes keeping an eye on one´s thinking not to lose one´s initial perspectives.

If leaving Ueda and the president (caveman) that has traveled back in time to save the mammoths but ran into an unexpected situation (a mammoth´s love), I like to return to Wood. Because what Wood never did was to leave any information to the hypothesis within the diegesis. He might even forget what his initial idea was and didn´t look back in his documents as to remind himself as Fumito Ueda did. But if Wood, as a constructor, had asked himself “What if?” and “What would I do?” if aliens came to earth, he might have got a hold on his thoughts and through them being able to do a plotting that met the expectations that would give the receiver´s a chance to do their work of plotting. But what I think caused problems for Wood was that his desire was not to settle down on his own or, for that matter, others’ heads. He just wanted to make a film which he did. And for that, I like to pay him my respect that he realized a dream just like Méliesè did but where Méliesè reciprocally shared his vision with the audience.

Want to read more? Part 2, The benefit and disadvantage of unconsciousness

This site uses Akismet to reduce spam. Learn how your comment data is processed.